Is CoolSculpting Safe For Arms With Tattoos? 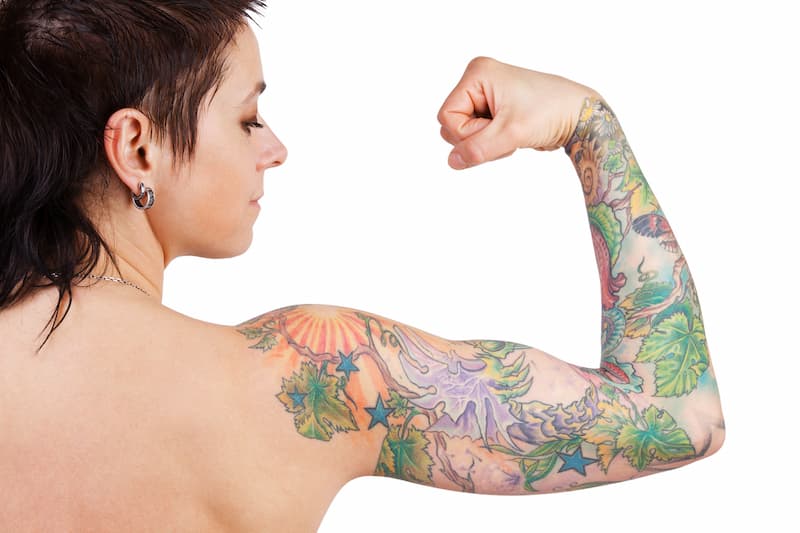 Coolsculpting has become a recent trend in the cosmetic industry. Proven to be a safe and effective way to help reduce fat cells in areas of the body, CoolSculpting may be what you are looking for when it comes to getting the toned look you want without having a surgical procedure. For problem areas, arm fat appears to be among the most difficult areas to get rid of fat. Fat freezing arms has become a popular solution for individuals searching for tighter, healthier looking arms.

It is not uncommon for patients to have questions about tattoos when they think about getting a CoolSculpting treatment. After all, body lifts do involve extensive areas of skin, and regions like the abdomen, arms, and thighs are popular spots for tattoos.

Is It Safe To Get CoolSculpting With Tattoos?

Over the years, CoolSculpting has been proven to be safe, non-invasive, and pain-free. Clients who are worrying about their tattoos getting ruined after a CoolSculpting procedure should not be worrying at all. Since CoolSculpting is FDA-approved, it is non-invasive and does not create any type of significant damage to the surrounding tissue or injury to a patient.

CoolSculpting uses very cold temperatures to target unwanted fat. Freezing the area causes the fat cells to be destroyed so the body can eliminate the excess body fat for good. This cryolipolysis process destroys the fat cells but does not cause lasting damage to your skin. The procedure will not be harmful for skin with tattoos. However, depending on how much fat is reduced, distortion of the tattoo may happen and the tattoo ink might fade once the fat is visibly reduced.

It is normal to experience minor side effects after the treatment. As coolsculpting results, your skin might look red and slightly swollen or bruised for a short time. You might experience temporary stinging, aching, itching, and tenderness in the area. These minor side effects should go away naturally after a week or two.

Will My Tattoo Be Erased?

The procedure alone will not erase any of the tattoos present on the target area. The CoolSculpting treatment is designed to contour problem areas without harming the skin.

This treatment will not mirror effects of tattoo removal procedures such as laser tattoo removal or other laser treatment. One benefit of body contouring procedures is that they can be customized. Your surgeon can take the presence of tattoos into consideration as they create your personal treatment plan.

However, as CoolSculpting is done to contour the arms and other body areas, it could have a slight effect on the appearance of the tattoo. CoolSculpting removes 10 to 20 percent of the fat targeted with each treatment. Depending on how much excess fat will be removed in the arms, the tattoo appearance may also be reduced.

Contouring Your Arms With CoolSculpting

How Does CoolSculpting Work On The Arms?

A specially designed cool sculpting applicator is used to address the unique contour of the upper arm. Depending on the size of the area being treated, different-sized applicator plates are used.

The CoolSculpting handpieces deliver suction and precise cooling to the treatment area. The ideal temperature for fat cell death is between 39 and 41 degrees Fahrenheit. The subcutaneous fat layer of the upper arm is cooled to the point that fat cells begin to die. The surrounding nerves, skin and muscles are unharmed by the process.

Most patients require between 1 to 3 CoolSculpting sessions for optimal results. The number of treatments needed depends on the individual's response to the procedure. It also depends on the extent of fat reduction the patient is hoping to achieve.

Getting Rid Of Flabby Arms With CoolSculpting

For many men and women, no amount of diet or exercise can adequately address stubborn arm fat. For some, genetics plays a factor in how much fat will collect in the upper and lower arms and how elastic the skin will be as you age. The aging process breaks down the collagen that gives the skin its firmness and elasticity, so bat wings are sometimes an unavoidable consequence. Fluctuations in weight can also play a role, especially if you have lost a significant amount of weight quickly.

CoolSculpting technology can be done on your arm to remove the fat deposits creating that stubborn bulge in the arm. This procedure is non-invasive and will freeze the subcutaneous fat deposits in your upper arm. On average, CoolSculpting can remove around 20% of treated fat cells from the treated area which will result in a more toned appearance and eventually get rid of the flabby arms.

Other Areas Treated With CoolSculpting

The stomach is one of the most common places the body stores stubborn fat cells so it can be very hard to reach this area with diet and exercise. This is also the most common area people want CoolSculpting to be done. Depending on which area of the abdomen you want to treat, you  might need DualSculpting or multiple treatment sessions.

Thigh fat can be particularly stubborn but CoolSculpting produces good results on the inner thigh and outer thigh areas. The skin on the inner thighs is usually easier to pinch and to feel surface fat. Fat on the outer thighs or "saddle bags" is harder to pinch but is still usually made up of the right tissue to be able to treat with CoolSculpting.

CoolSculpting can even treat visible bulges under the chin and contour the neck. Freezing fat away from a double chin is as easy and tolerable as using the CoolSculpting procedure in other parts of the body

The love handles are those areas of stubborn fat that often form on a person's sides. Bulges at the sides of your waist, or "love handles," respond incredibly well to CoolSculpting, even when weight loss has not seemed to shrink them.

You can either treat your flanks one after the other, or you can treat both at the same time. Known as Dualsculpting, the process lets you double your results from the treatment in half as much time.

Coolsculpting is very effective for treating visible fat bulges on certain areas of the back. The three most commonly treated areas are the parts of the lower back that extend from the love handles, the mid-back fat on the sides, and bra fat under the bra line.

Coolsculpting can help remove unwanted fat cells in the breast area in men who suffer from gynecomastia, or enlarged male breasts. The treatment is not effective for all men with enlarged breasts but it can help reduce breast size due to extra fat. If there is a lot of breast tissue, surgery might be a better option to remove the actual breast tissue.

Get Rid Of Excess Arm Fat With CoolSculpting

NJ Center for CoolSculpting is a state-of-the-art med spa in New Jersey staffed by the best CoolSculpting experts in the region. Our facility specializes in the CoolSculpting session, allowing us to offer options like DualSculpting and CoolMini treatments for small areas such as your arms.

Give us a call today and schedule your initial CoolSculpting appointment.