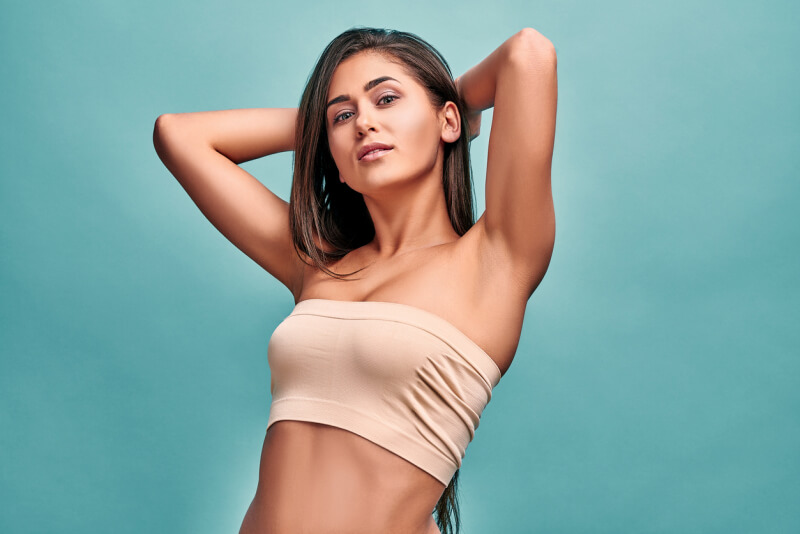 A lot of women are frustrated with their underarm breast tissue (also known as bra fat) and it’s understandable. The bulge in the bra area tends to respond poorly to diet and exercise, unlike other areas of the body. Non-invasive cosmetic treatments such as CoolSculpting is now becoming a favored treatment for reducing bra fat and removing the unsightly bulges straining from the elastic.

So can CoolSculpting reduce underarm breast tissue? CoolSculpting can certainly make bra bulge and armpit fat a thing of the past with its ability to address fat pockets that stubbornly cling to the body despite your best efforts in diet and exercise. As long as you’re the ideal candidate for the procedure, there’s no reason why CoolSculpting shouldn’t work for you when it comes to banishing bra fat.

Causes of Bra Fat and Back Fat

There are several factors that contribute to the formation of axillary breast tissue, also known as underarm breast tissue or fat deposits on the armpit. The usual culprits are poor diet, lack of exercise, and aging. The first two will definitely make you gain weight in any part of the body, while aging makes the skin sag naturally, hence the drooping of certain areas such as the back and armpits.

Other factors, such as hormonal changes or having too much cortisol in the body, poor sleep quality, and metabolic conditions such as insulin resistance and hypothyroidism, also contribute greatly to your having bra and back fat.

CoolSculpting can definitely treat armpit fat and front bra bulge as long as you’re an ideal candidate for the procedure. Doctors will recommend that you’re at least 10 to 25 pounds above your ideal weight and can keep obesity in check. CoolSculpting uses a suction applicator and if you have too much fat, the applicator may not be able to suck the flesh properly.

You can’t be too thin as well, because the applicator needs something to cling onto. If you’re above the recommended weight range, you will be advised to lose excess weight first before coming back for the procedure.

There are cases that the excess tissue is not fatty deposits but lipoma. This should be examined by the doctor first before giving the go-ahead for the CoolSculpting procedure.

How CoolSculpting for Bra Fat Works

CoolSculpting, also known as Cryolipolysis, freezes fat cells and makes them go into the cell death phase called apoptosis. The frozen fat cells get destroyed and flushed out of your body naturally through your lymphatic system. To prepare for treatment, your doctor will mark the target areas and your skin will be given a pre-treatment wipe for cleansing. A gel pad will be placed on the treatment area as a safety barrier for your skin.

Your doctor will then place the suction applicator on the market areas to start the freezing procedure. The suction will target the stubborn fat deposits in your problem area. The procedure will go on for around 35 to 45 minutes, depending on the size of the applicator used. During the treatment, you are advised to sit still – you can actually watch a movie or listen to something using your headphones.

You will feel some discomfort because of the cooling sensation, which is like putting an ice pack on your skin. The area will numb eventually after several minutes. After the suction tool is removed, your doctor will massage the area manually. Some patients find this stage a bit painful since it’s like rubbing on top of a bruise. But this is needed for the fat cell to disperse and shouldn’t last more than five minutes.

Areas Around the Armpit That Can Be Treated With CoolSculpting

When handled by an experienced professional, there’s a lot that a CoolSculpting tool can accomplish. It can treat various areas in the armpit area such as the portion at the front side of the arm, the area directly under the armpits, and the area along the bra line, both above and below where the bra sits.

An expert provider can target the drooping upper arm (also called bat wings), the area at the top of the bra line and along the armpit, or the area directly under the bra line. Your doctor can also target the spot at the front line of your body, the part that pokes out in your sports bra. The treatment plan will depend on your desired goal and your budget.

Because it’s a non-invasive procedure, CoolSculpting comes with minimal recovery time. You can resume your usual activities after your session. Some side effects are normal and to be expected, such as light bruising or aching in the treated area. This should disappear after a couple of weeks. You can feel the slight pain or discomfort during or after the procedure.

The results of your CoolSculpting treatment is a gradual process, so don’t expect to see anything dramatic right away. Your body will be going through the process of flushing out the destroyed fat cells naturally and then you will begin to see the changes. Your doctor will ask you to come back after six to eight weeks to check your progress. If he recommends a second round of treatment, you can also have it during this time as well.

The full results will slowly reveal over the course of three to four months, after which your doctor will schedule a final appointment to have your photos taken and compare the before and after results.

How Many Sessions Required For CoolSculpting Underarm Breast Tissue

Treating bra fat, which is part of your back, may require multiple treatment sessions to get the most dramatic results. Luckily, you don’t need to deal with anesthesia or a lengthy recovery period. If a large applicator was used in your procedure, you may only need a single session to get the job done.

Remember too that although upper back fat is generally a concern for women as it creates an unattractive bra bulge, men can have similar issues with it as well. It shouldn’t be a problem since CoolSculpting works for both men and women.

Your doctor or plastic surgeon may also recommend more than one session, so the complete results of your CoolSculpting treatment can come much later.

The cost of treatment is one of the major factors in a patient’s decision to go ahead with the procedure. Generally, CoolSculpting is priced by the cycle, which is a unit of measurement that describes the application of a CoolSculpting applicator to the body. This will depend on the area you plan to get treated and how many sessions you will need.

To give you a general idea, there can be a set pricing each for armpit fat, upper arm, above the bra line, and below the bra line. This should be discussed in depth with your doctor during the consultation.

Risk of Damaging Lymph Nodes in the Armpit Area With CoolSculpting

This is an understandable concern since the underarm area is sensitive. Some patients may need to have medical clearance before any procedures can be done near the underarms and especially near the breast tissue. As long as your doctor gives you a clearance, you don’t have anything to worry about.

Are the Results of CoolSculpting Permanent?

CoolSculpting removes the fat cells completely, so in your case, the underarm lift or arm lift effect should be for long-term. However, it’s tricky to say that the CoolSculpting results are permanent. Although the cosmetic procedure can eliminate the excess fat, it can’t stop any fat gain that you will have in the future.

This is why your doctor will constantly remind you about the importance of maintaining your weight after getting the fat reduction treatment. You will still get fat if you don’t stick to a healthy diet or exercise regularly. However, if you do gain too much weight, the fatty tissue will get distributed evenly across your body because you will never have as many fat cells in the areas you got treatment for.

Get Rid of Unsightly Bulges at NJ Center for CoolSculpting

You don’t have to remain uncomfortable with underarm fat or bra fat ever again because NJ Center for CoolSculpting can sculpt the fat out of your system. You get the safest and most effective treatments to reduce stubborn, unwanted fat and excess skin from your body in the hands of board-certified doctors, certified aestheticians, and licensed physician assistants.

The center's team of experts can easily address issues in common problem areas such as double chin, excess fat in inner thigh and outer thigh, loose skin, and many more, without having to use plastic surgery or invasive procedures such as vaser liposuction, liposuction surgery and tummy tuck. With their fat removal and body contouring techniques, you don't have to worry about any kind of incision and general anesthesia. Call now and schedule an appointment with one of the center's top specialists.